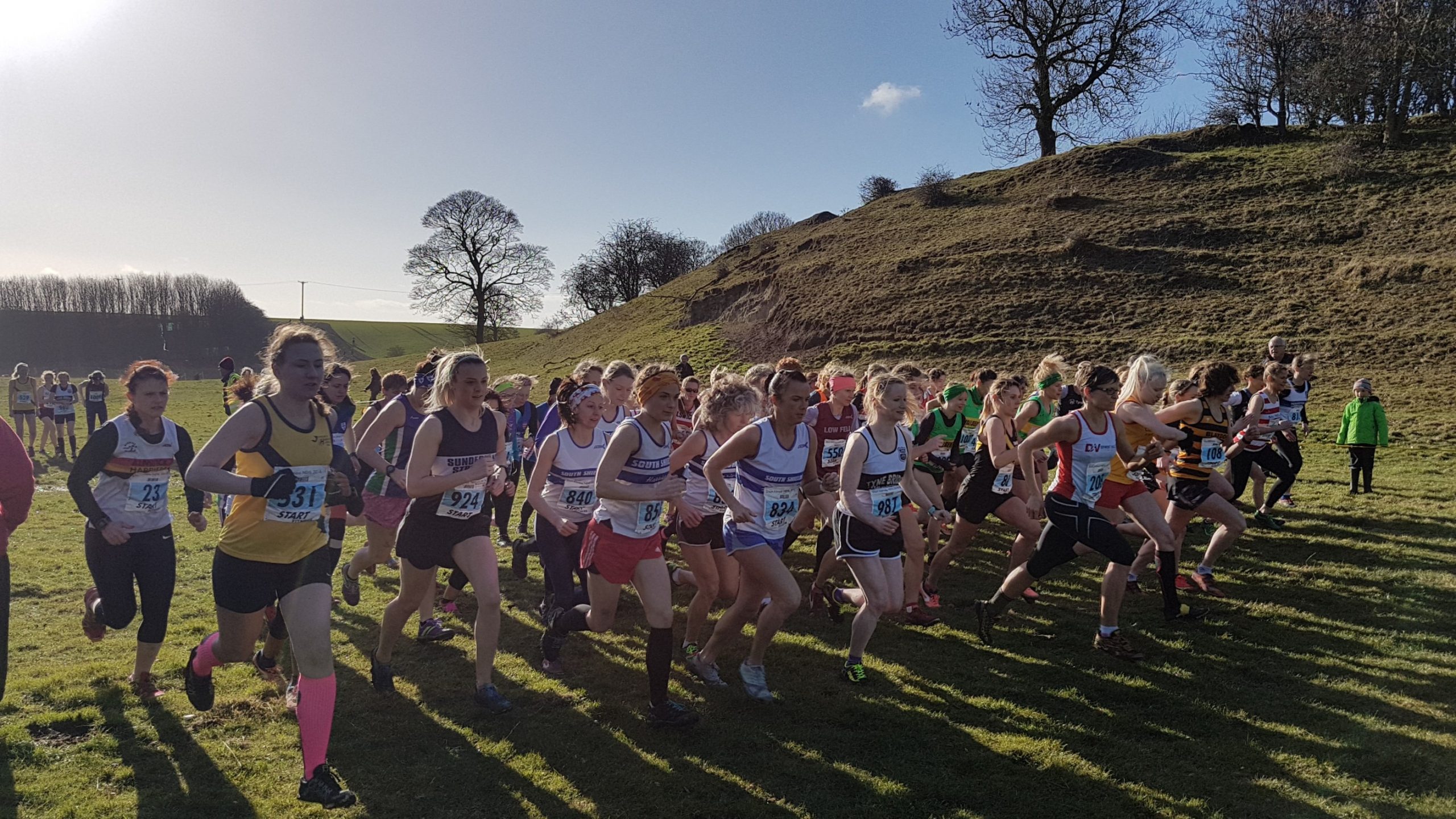 Cross country races normally take place during the autumn and winter months over natural terrain, such as fields, woodlands, parks and country estates. It is both an individual and a team sport, with individual runners ranked on their finishing time, and teams by points-based systems. Race difficulty varies depending on the course profile, terrain and the weather. During a typical cross country season you can expect to experience a variety of weather, including sun, wind, rain and snow (sometimes all in the same day!) and temperatures ranging from balmy to sub-zero. Competitors should choose footwear according to the weather and conditions underfoot; with trail shoes preferable for dry or gravelly courses, and cross country spikes for wet and muddy conditions. You should also bring a warm, dry set of clothes to change into after the race. The club will bring a tent to local cross country fixtures to provide shelter and changing facilities; just look out for the club flag in the club tent village. You don’t have to be of a particular standard to take part, so even if you’re new to running you can give it a go. There are different types of cross country competitions, including local leagues, regional and national championships, and relays. More information on each competition is below.

Please note: Jarrow and Hebburn AC will pay entry fees for members who want to compete in the Harrier League, North Eastern Championships, and relay championships. If members enter competitions, but do not race, they will be asked to repay their fee to the Club.

The North East Harrier League (NEHL) is a series of six cross country races for affiliated clubs in North East England. You don’t have to compete in all the races and you can start at any point in the season. Races take place at different courses across the region. You collect your individual race number at the first fixture and you should retain it for the season (remember to bring safety pins to fix it to your club vest). If you lose your number, you will be charged £5 for a replacement.

The League has a handicap system with slow, medium and fast packs. The senior men’s race is approximately 6 miles. The packs start at 2.5min intervals with the slow pack starting first. Slow or medium pack runners finishing in the top 10% will be promoted to the medium or fast pack respectively. The senior women’s race is approximately 4 miles with packs starting at 2min intervals and a top 10% finish seeing you promoted into the next highest pack. Junior age groups have fast and slow packs only with a top 20% finisher gaining promotion to the fast pack. If you are promoted to a higher pack, you stay in the higher pack for the remainder of that season and for the following season.

Senior clubs are ranked in divisions. Runners score points for their club depending on where they finish in each race. The finish position of the club’s first 6 men (or 4 women) are added together for the team score. Teams are then ranked (men and women separately) and compete to win their division or avoid demotion. But all runners matter – non-counting runners affect the position of counting runners from other clubs, so everyone plays their part.

There is an additional fixture in the Harrier League schedule: The Sherman Cup and Davison Shield, a standalone competition, with no packs, which usually takes place at Temple Park in South Shields.

Harrier League fiixtures for the 2022-23 season will be posted below in due course.

In addition to the local Harrier League, Jarrow and Hebburn AC members are eligible to compete in three major championship events; the North Eastern Cross Country Championships (often referred to as ‘the Northeasterns’), the Northern Athletics Cross Country Championships (often referred to as ‘the Northerns’), and the National Cross Country Championships (often referred to as ‘the Nationals’). Championship races are longer in distance than local leagues, typically 12km (7.5 miles) for senior men, and 8km (5 miles) for senior women. Members can enter and compete on an individual basis, and as part of a team, with the top six finishers for each club scoring points in the senior men’s race, and top four finishers scoring points in the senior women’s race. In championship races, everyone starts at the same time (known as a ‘scratch’ start), unlike the Harrier League, which is divided into different starting ‘packs’. Championship events are open to all members, regardless of ability. Entry processes vary, but if you are interested in taking part, please email the Club Secretary at Secretary@jhac.org.uk. Information on the individual races and prospectus will be posted below when available.

Each county can enter teams of twelve athletes in each age group, with eight athletes to run of which four will score, except for Senior Men and Senior Women where fifteen can be entered, with nine to run and six to score. More information will be provided in due course.