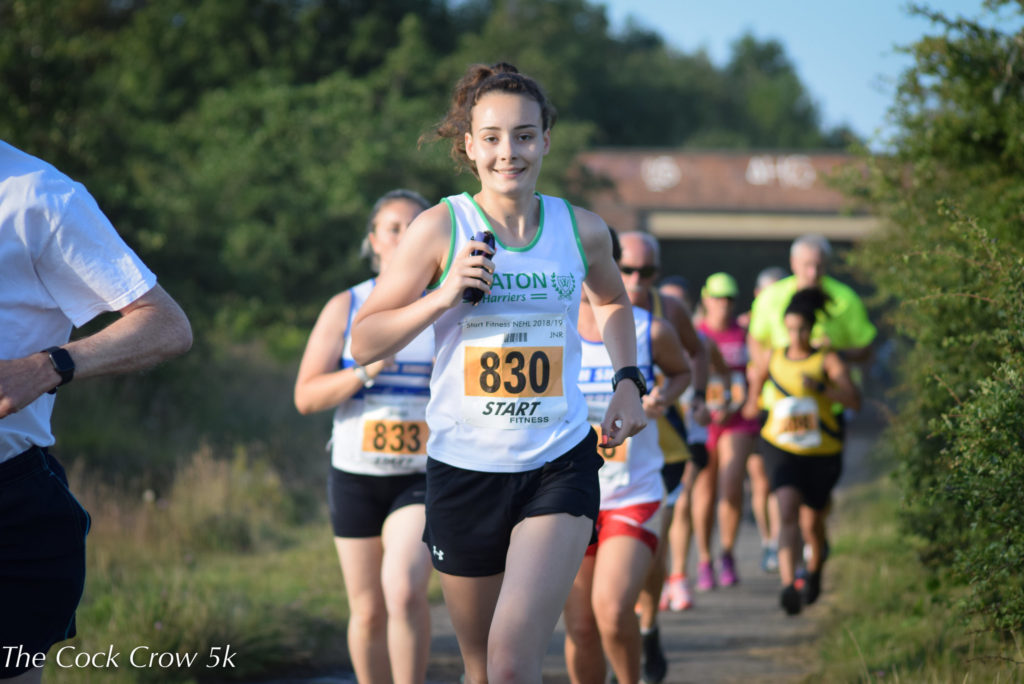 The Jarrow and Hebburn AC Cock Crow 5k Race and 2km Junior Fun Run took place on a balmy summer’s eve on Tuesday 23 July 2019. The temperature had peaked at around 28 degrees Celsius mid-afternoon, which was a challenge for volunteers setting up the course, but thankfully dropped to a more pleasant 22 degrees by race start time. 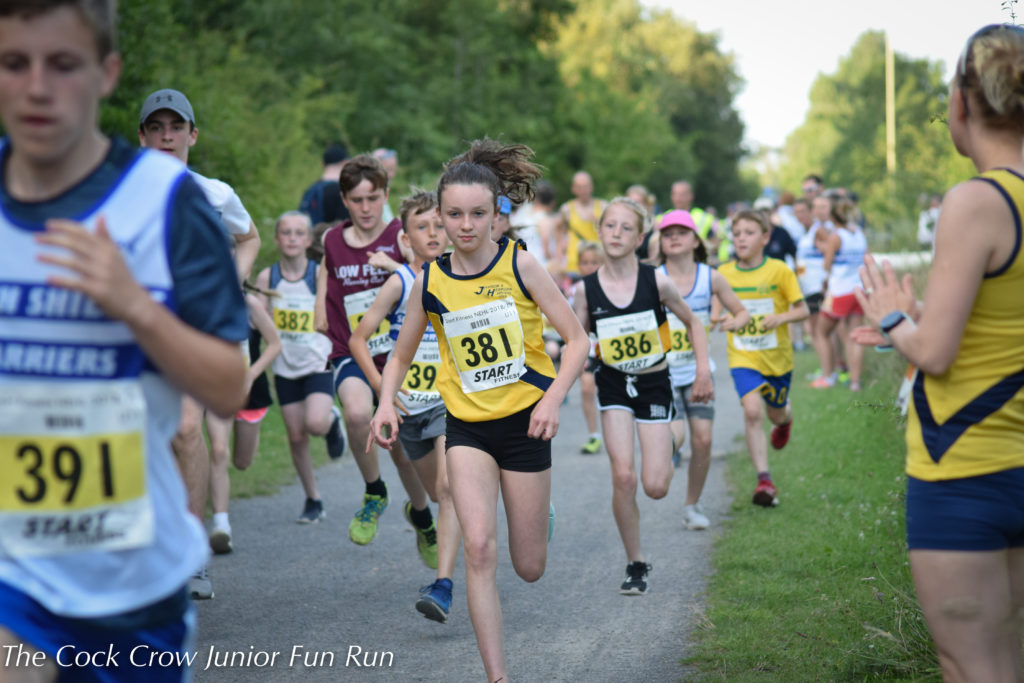 The first run of the evening was the 2km Junior Fun Run, open to those under the age of 15, which started at 6.50 pm. Seventeen juniors completed the run, with Owen Hedley and Darcy Tullis, both from Jarrow and Hebburn AC finishing first male and female respectively, and a trio of South Shields Harriers: Matthew Burton, Benjamin Weston and Hayden Steven in positions 2, 3 and 4. Results can be found here and run photos can be found here.

The Cock Crow senior 5km race kicked off at 7.15 pm, with a busy field of 140 runners. For the benefit of those who have not raced it before, the course has a very quick start, with a straight, flat 1,300 metre dash along the Bowes Railway Path, before taking a sharp right turn through a gate, which leads to the first hill. From the top of the hill you descend a sandy trail path back onto the Bowes Path, with expansive views of the surrounding countryside. This year, the fence leading back to the path had been knocked down, which meant runners could run straight through, rather than having to vault a stile. You then take a left across a small bridge, which leads to the new out-and-back section of the course, introduced in 2018 following the installation of kissing gates on the old route. The race then cuts through parkland, skirts a pond, recrosses the bridge and heads back along the Bowes Path to the finish.

Kurt Heron was first male home in a time of 16:20; a new record for the re-measured course, followed by Ross Floyd from Morpeth Harriers, who just pipped an impressive Jack Brown of Jarrow and Hebburn AC into second place. Sparrow Morley of Tyne Bridge Harriers was in fourth place, having ran at the Northumberland Coastal Run on the Sunday and the British Miler’s Club meeting at Chester-le-Street the evening before. Alex Sneddon of Jarrow and Hebburn AC was first lady; a stunning return to winning ways, only five months after giving birth to her first child. Jemma Amin of South Shields Harriers was second lady, with Hazelle Webster-Costella of Jarrow and Hebburn third.

For a race usually dominated by runners from Jarrow and Hebburn AC and South Shields, it was fantastic to see more representation from the wider North East running club community, with particularly noteworthy performances from Sunderland Strollers, who won the men’s team prize, Nina Cameron from Heaton Harriers as first lady in the 40-49 category and Graeme Dockwray from Low Fell RC as first male aged 50-59. Maurice Woodward from Jarrow and Hebburn AC topped off a fine season, with the prize for first male 60-69. In the ladies team competition, South Shields Harriers and Jarrow and Hebburn AC were level on aggregate points, but South Shields were winners by virtue of their third counter (Rachel Breheny) crossing the line first.

Arguably the most important competition of the night took place to determine who would take home the Mark Wood Memorial Shield. The Shield was introduced in 2018 and is awarded to the first mixed team of two men and two women (Based on aggregate points) between the hosts Jarrow and Hebburn AC and South Shields Harriers. It is named after South Shields Harrier Mark Wood, who tragically passed away in 2017 and was a good friend to runners from both Clubs. The Shield was presented by Mark’s daughter Katie to the winning team of Jarrow and Hebburn AC, who retained it this year with a team of Jack Brown, Andrew Laidler, Alex Sneddon and Hazelle Webster-Costella.

The other prizes were kindly presented by Nick Morton, Director from our race sponsors MICC Ltd.  a British company with a factory in Washington, who are the world’s leading manufacturer of mineral-insulated cables. MICC have supported our Club races for almost a decade and if it wasn’t for them, the Cock Crow race would not be possible. Thanks also to our other race sponsors, Gateshead Senators, a local American Football team who play and train at Monkton Stadium, who are always on the look out for new players, coaches and young people who may be interested in joining their academy. Further thanks to our race officials Alan Elders, Bill McGuirk and Les Venmore, our chip timing and results team of Paul Dixon and Vicki Thompson, the Cock Crow Inn for being helpful and accommodating hosts, to St. Joseph’s Catholic Academy for letting us use their car park, and to all our volunteers and marshals.

Results from both runs from 2019 and previous years can now be found on the Harrier League website here.

Official race photos courtesy of Mark Robinson (Darlo Runner) can be found here for the 2km Fun Run and here for the 5k race. To follow him on social media, please visit: