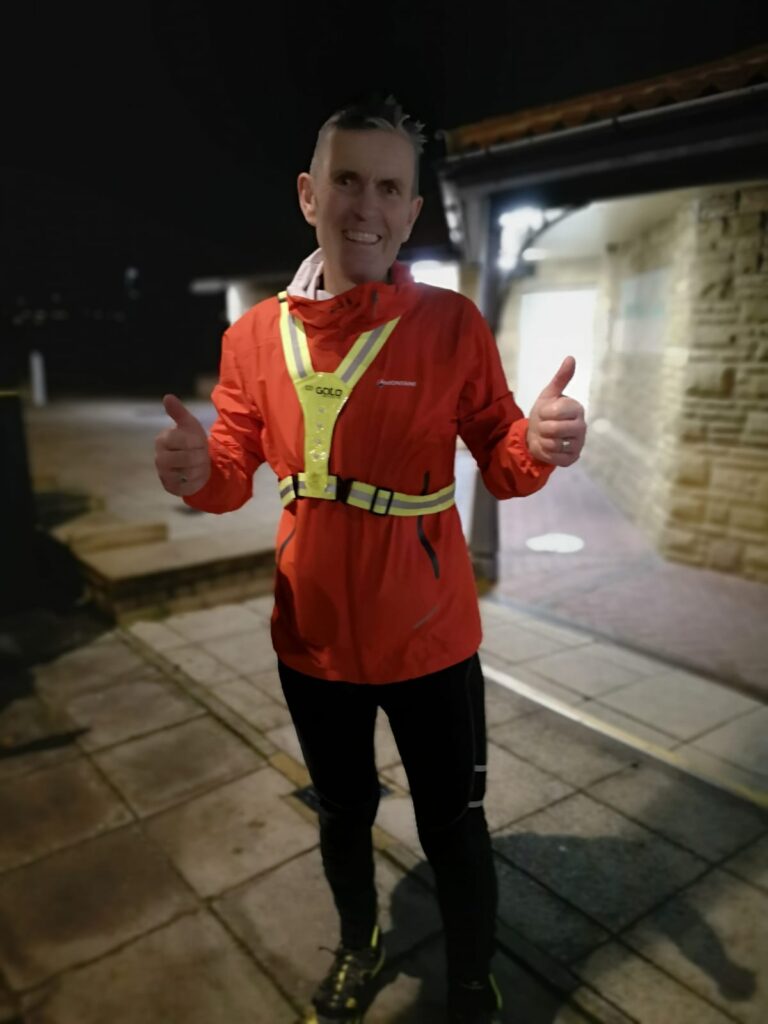 Congratulations to Jarrow and Hebburn AC legend Carl ‘Mowza’ Mowatt, who ran an astonishing 101.4 miles in 23 hours 6 minutes, to raise money for Guide Dogs. His epic challenge started in the early hours of Saturday 24 October, taking in the entirety of the Tyne and Wear Heritage Way, and finished on South Shields seafront early on Sunday 25 October. Carl smashed his fundraising target of £5000, raising enough money to provide a canine companion to someone who is blind. You can still donate via his JustGiving page. Thank you to everyone who supported him before, during and after his challenge, including members from both Jarrow and Hebburn AC and South Shields Harriers. You can watch highlights from this amazing feat on YouTube and here is the write up in the Shields Gazette. 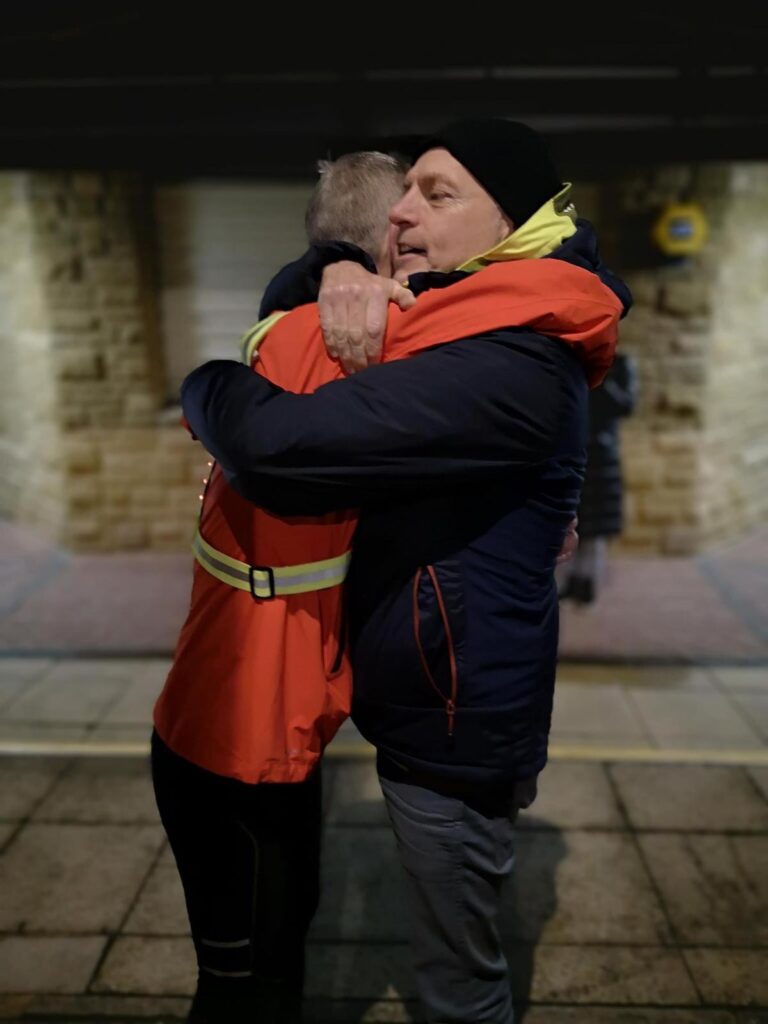 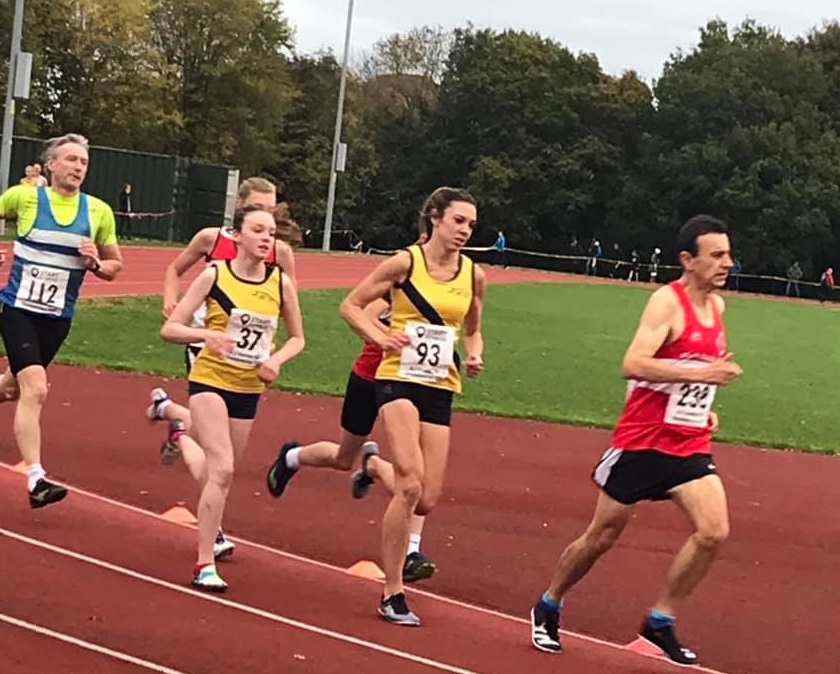 On Sunday 18 October, Jarrow and Hebburn travelled to Morpeth again for the NECAA open meeting, incorporating the Jimmy Hedley trophy (800m) and the Stan Long trophy (1 mile). The day was dry and wind-free and fantastic day for the athletics.

Well done to all the athletes in todays event, everyone has done so well. 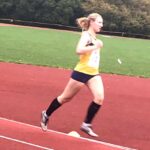 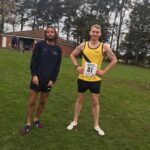 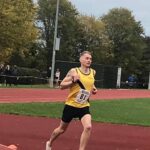 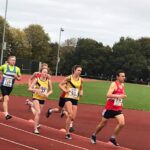 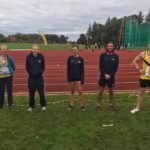 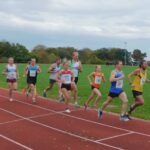 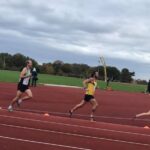 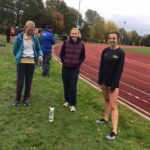 Another race weekend, and another group of Jarrow and Hebburn AC runners turned out for the Wild Deer event on the trails surrounding Beamish Hall. A very well organised and socially distanced event, with runners starting in small waves of 6 at regular intervals. The tea/coffee/bacon sarnies waiting at the finish line was a nice touch.

The course was as challenging as we expected with a lot of climbing, about as much mud and probably more swearing as runners made their way around the route.

END_OF_DOCUMENT_TOKEN_TO_BE_REPLACED

Hello lads and lasses, here are some results from recent races. First of all, we have Carl Mowatt who ran the Tyne Ultra 55K on the 3rd of October, finishing 1st in his age category and 17th overall. Carl is also doing a 100 mile run all in one go on 24th October, to raise money for Guide Dogs for the Blind and would appreciate any donations on his Just Giving page. If anyone would like to support him on his epic journey it would be mostly appreciated.

The next race was held by Darlington Harriers at the Eastbourne Sports Complex on Saturday 10th October, with Hazelle Webster-Costella running a fantastic time of 5:55 in the 1 mile event. A huge well done to both members. 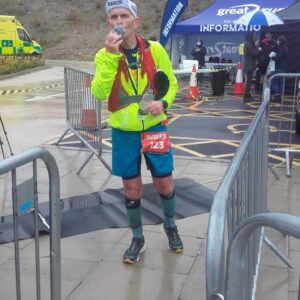 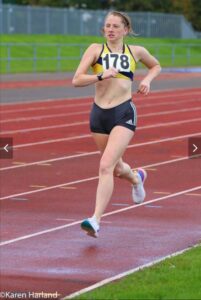 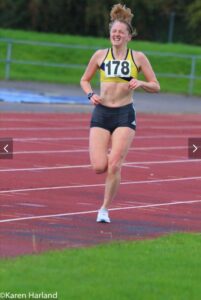 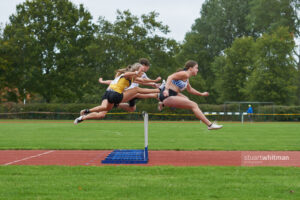 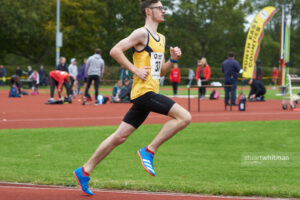 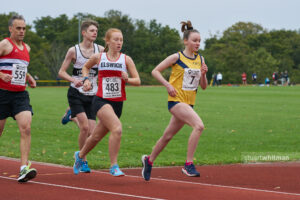 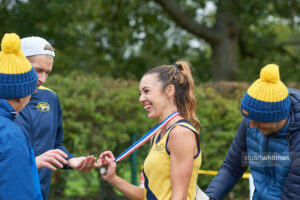 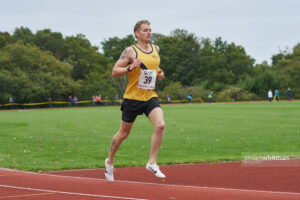 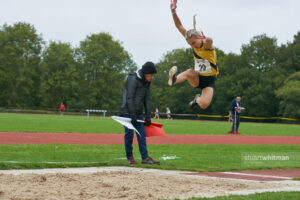 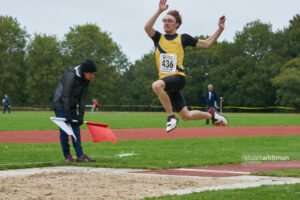 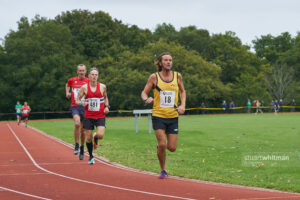 The NECAA 2020 Cross Country Championships at Sedgefield on 12 December 2020 have unfortunately been cancelled.

Here is a statement from the NECAA:

“It is with regret and reluctancy the NECAA have decided to cancel the 2020 cross country championships in their established form to be hosted by Sedgefield Harriers. The publication of the England Athletics `Return to Cross Country Competition` makes planning a championship with a big entry difficult plus the ongoing uncertainty during the pandemic and specifically procedures to keep everyone safe.

The NECAA are looking into possible alternatives including split championships. Dates and venues will be advertised when known.

In the meantime, the NECAA encourage clubs to stage small local inter club events under the EA guidelines to keep athletes competitively fit and motivated. The sport evolved from local inter club competitions”.

Three men ran the Dalton Park 10km: Andrew Laidler, Darren Parks and Garry Reay. This was the first race for all of the lads since everything has been cancelled due to this nasty virus. The start was staggered 5 mins apart in groups of 6. The weather was spot on for racing and it was a wind free dry and warm day, if only the same could said about the new route, which wasn’t the easiest of 10kms and definitely not a PB course. Andrew was first of the Jarra lads to be sent away and was the first home also in a impressive time of 35:45. Garry and Darren also had fantastic races with Garry winning his age category in a fantastic time of 38:34 and Darren running 39:39 which is also a remarkable time. Well done lads! It just goes to show that our coaches hard work and dedication and all the sweat you have been putting in is starting to pay off. 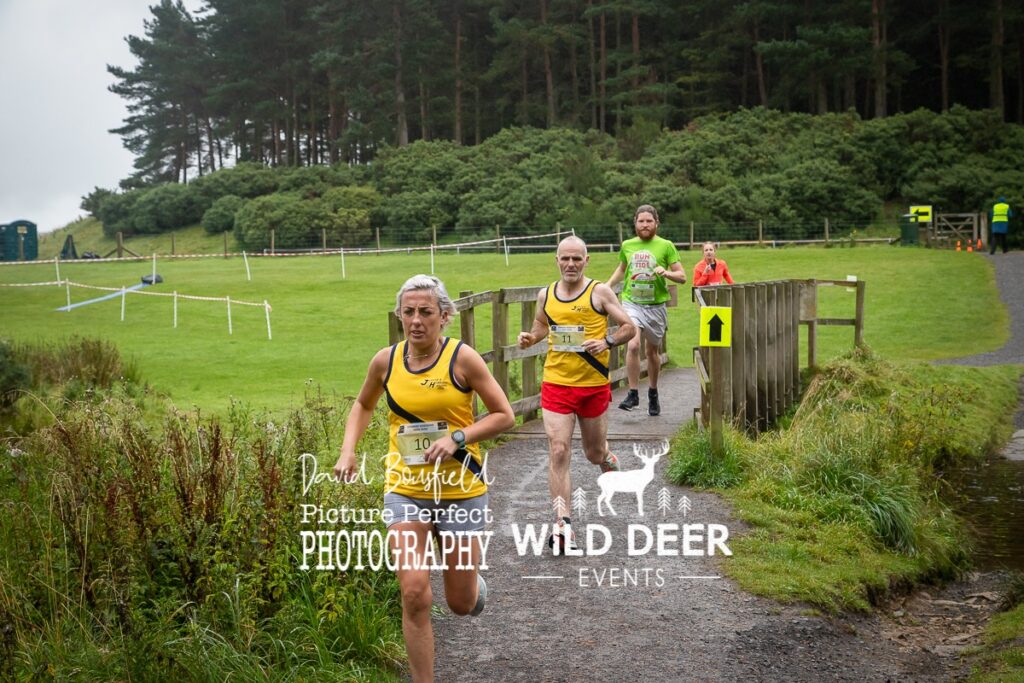 Nine Jarrow runners traveled to Derwent for this Wild Deer event on what can only be described as a horrendous day, but a lot better the the 10 mile race held earlier in the year. The first race was the family 2.5km, which set off 9am, shortly followed by the first wave of the 5km in which we had Garry Reay, Andrew Thornton, Paul Emmerson and myself (Carl Smith) taking part. Our wave set away first at 09:10 then each wave every 3 minutes after. There were 2 Morpeth lads in the first wave of 6 and we knew it was going to be a little bit of a test. Me and Garry had already spoke and had an idea of a race plan but that seemed to go out of the window within the first mile. Everyone seemed to have the same idea to go out hard, hanging on to the lead Morpeth lad’s heels. I decided to go with him and before the first mile it seemed to pay off and I passed him and just hung on for dear life and put a bit of air between us. The first time I actually looked over my shoulder was the last 300m from the finish line and I was more relieved to know the end was near. Garry was hot on the Morpeth lad’s heels. It was the first time I have finished first in anything, so I was extremely happy and to my delight also seeing my training partner Garry finishing third (1st in his age category) added to the celebrations.

The 10km was also a really well organised event and was set away in waves. We had new member Rachel Breheny running, as well as Paddy Mcshane, Darren Parks, Brian Hurst and Richard Scott. We didn’t see the start as we were at the other end of the course, but at the half way point we got to see every one run and everyone looked really strong, Darren was somehow last to be set away by nearly a hour but gave a huge performance on the day. The final results for the 10km were also extremely good, with Rachael being first lady home and Darren and Paddy finishing second and third in their age categories. The day was a great success and the team ran amazing, so a huge well done to each and every one of you. 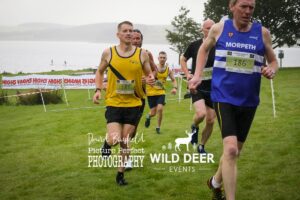 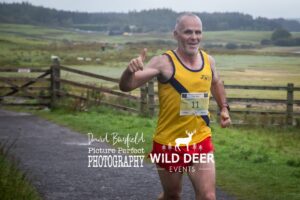 If you haven’t entered this race yet, we have a high number of entries into Croft 5k on Saturday 28 November. There are around 20 JHAC athletes entered as of the beginning of September, so don’t leave it late! There are outline plans for a Club social event after the race, following the cancellation of the Club annual awards evening – more info to follow soon.

The Jarrow and Hebburn Annual General Meeting will take place on Monday 7 September 2020 at 6.30pm virtually via a link on Microsoft Teams. The event is open to all current and honorary members, as well as parents and carers of junior members.

This is also our company AGM so the agenda includes the appointment of director(s) and presentation of company accounts, in accordance with our articles of association. Here is the AGM Agenda and here are the minutes from the previous AGM on 7 May 2019. 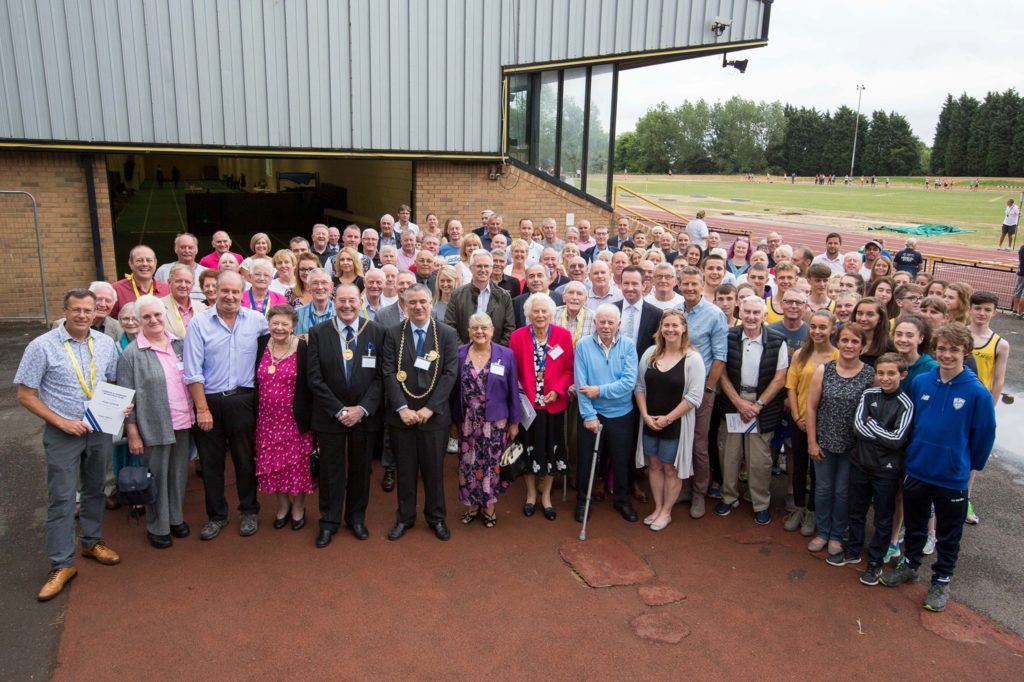 Jarrow and Hebburn AC are delighted to announce that memberships for 2020-21 are now open.

Current members will be sent an email on 1 August 2020 with a link to pay their membership fees online.

New members need to complete a membership form return it by email to Secretary@jhac.org.uk and pay fees by bank transfer.

Returning members who have been away from the Club for over a year need to follow the same process as new members.

More information, including forms and fees, can be found on our membership page here.

Please note that the track at Monkton Stadium remains closed,. The Club is busy planning the safe resumption of athletics sessions at the Stadium and is in dialogue with South Tyneside Council, but this may be several weeks away. Training sessions are currently being delivered by Club coaches under Covid-safe conditions in local parks and public spaces. If you are a current member, please contact your coach for information on these. If you are a new member, or are interested in joining, please email Secretary@jhac.org.uk for information on coaching groups.